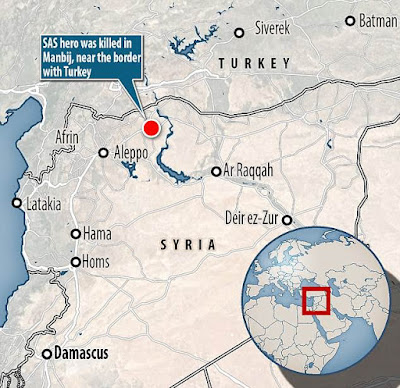 Daily Mail: REVEALED: US Navy SEAL accidentally killed himself and British soldier when his grenade unintentionally detonated during undercover mission in Syria

* US Navy Seal Master Sergeant Jonathan J Dunbar, 36, and British Special Air Service Sniper Matt Tonroe, 33, died in March 2018 during a mission in Syria
* At first their death was reported as a roadside bomb explosion
* An investigation concluded that they died after an explosive in Dunbar’s possession detonated, killing them both and injuring five others
* The UK’s Ministry of Defence revealed the report conclusions on Saturday
* Tonroe, of Manchester, was embedded in Seal Team 6, the same unit that killed Osama Bin Laden, and was the first British person to die fighting terror in Syria
* Dunbar, of Austin, Texas, joined the army in May 2005

A US Navy Seal unintentionally killed himself and a British soldier while fighting ISIS in Syria after he accidentally detonated a grenade, the UK’s Ministry of Defense revealed Saturday.

At first it was reported that they both died in a roadside bomb explosion but a new report revealed they died after ‘explosives’ carried by allied American forces detonated.

Tonroe, of Manchester, UK, was embedded in Seal Team 6, the same unit that killed Osama Bin Laden, and became the first British person to die fighting terrorists in war-torn Syria.