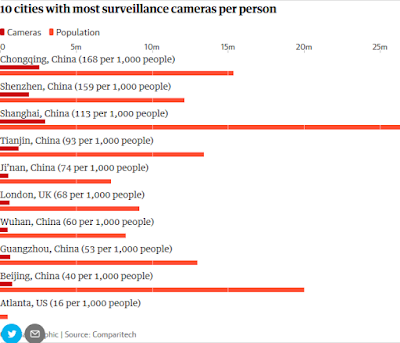 10 cities with most surveillance cameras per person

The Guardian: Big Brother is watching: Chinese city with 2.6m cameras is world’s most heavily surveilled

Cities around the world are scaling up their use of surveillance cameras and facial recognition systems – but which ones are watching their citizens most closely?

Qiu Rui, a policeman in Chongqing, was on duty this summer when he received an alert from a facial recognition system at a local square. There was a high probability a man caught on camera was a suspect in a 2002 murder case, the system told him.

The city’s surveillance system scans facial features of people on the streets from frames of video footage in real time, creating a virtual map of the face. It can then match this information against scanned faces of suspects in a police database. If there is a match that passes a preset threshold, typically 60% or higher, the system immediately notifies officers. Three days later the police captured the man, who eventually admitted that he was the suspect.

WNU Editor: 2.6 million cameras for just one city. That is a truly astounding number.