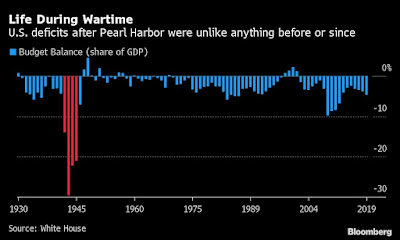 Ben Holland and Enda Curran, Bloomberg: How Coronavirus Has Upended Economics in Just a Few Weeks

(Bloomberg) — In the heat of a global crisis more sudden and severe than anything in living memory, economic orthodoxies are getting tossed aside at a furious pace. Some of them may be gone for good.

Public debt, for example, has often been seen as a drag on economies — but right now it’s more like a lifeline. The coronavirus has shut down swaths of private business. Whatever their prior views on budget deficits, leaders have been forced to fill that gap by channeling cash to households, businesses and markets.

With government spending helping to steer countries through the pandemic, it may not be easy to turn off the taps afterward. Politicians will have little incentive for belt-tightening measures that could endanger a rebound. Economists, especially from the rising Modern Monetary Theory school, will argue that in a low-inflation world there’s no need to try.

WNU Editor: I shudder when I think about the subject of public debt, and what governments are now doing to alleviate the impact of the Covid-19 pandemic. Debt levels before this pandemic were already putting a strain on government budgets. The prospect of now generating debt levels that are 20% of GDP or more is a recipe for a disaster, I should know because I have seen it before in Russia. When the Soviet Union was collapsing, the new Russian government decided that the best way to save the imploding economy was to institute a policy of massive government debts and cash giveaways. It helped in the beginning, but it then led to currency devaluation, high inflation, high interest rates, and eventually high unemployment.