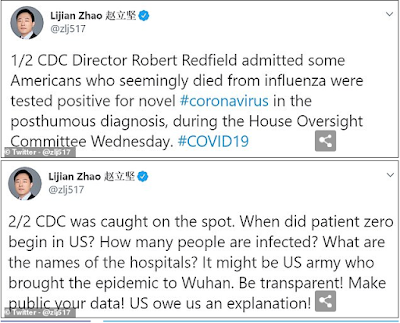 Daily Mail: Beijing’s spokesperson who blamed coronavirus on US troops defends his accusation, saying it’s ‘a reaction to some US politicians stigmatising China’

A Beijing official who blamed China’s coronavirus outbreak on the US military has broken his silence and defended his accusation.

Zhao Lijian, a spokesperson from the country’s Ministry of Foreign Affairs, described the allegation as ‘a reaction to some US politicians stigmatising China’, reported state media.

He lent his support to a conspiracy theory and tweeted on March 12: ‘It might be US army who brought the epidemic to Wuhan.’

He said yesterday that the tweet reflected ‘the indignation of many Chinese people’.

WNU Editor: He is part of China’s international campaign to shift the blame of this pandemic to the U.S.. My advice to the U.S. is that they double down to point out that this pandemic stated in China, and news was suppressed by China until it became impossible to hide it.