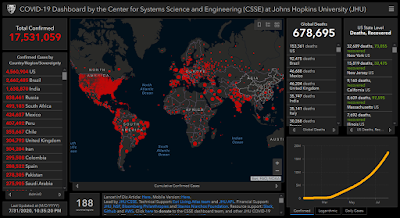 Reuters: WHO reports record daily increase in global coronavirus cases, up over 292,000

The World Health Organization reported a record increase in global coronavirus cases on Friday, with the total rising by 292,527.

The biggest increases were from the United States, Brazil, India and South Africa, according to a daily report. Deaths rose by 6,812. The four countries have dominated global headlines with large outbreaks.

Nearly 40 countries have reported record single-day increases in coronavirus infections over the last week, around double the number that did so the previous week, according to a Reuters tally showing a pick-up in the pandemic in every region of the world.

Hong Kong delays legislative elections for a year over COVID-19.

Soldier in eastern DRC shoots and kills at least 12 civilians.

Tens of thousands rally in Belarus despite pre-election crackdown.

Russia says alleged mercenaries are ‘in no way connected’ with Belarus.

Poland: US to deploy at least 1,000 troops on eastern border.

Underage girl forced to have sex with Prince Andrew, US court document claims.

Fitch downgrades US outlook to negative from stable.

Three people charged in US for alleged roles in massive Twitter hack.

Mexican president Amlo says he will wear mask ‘when there is no corruption’.

Recovered from virus, Bolsonaro says nothing to fear.

British ISIS ‘Beatles’ who have admitted their involvement in the captivity of US aid worker Kayla Mueller ‘will be spared the death penalty so they can be brought to the US and face trial’.

Jihadi bride Shamima Begum’s return to Britain is put on HOLD after Government wins right to fight case at the Supreme Court.

Terrorist who threatened to blow up NYC buildings and follows ‘Blind Shiekh’ Abdel Rahman is released after 30 year sentence – but Feds fear he will strike again after he vowed to stop taking his medication.

BREAKING: Trump announces he will BAN TikTok in the U.S..