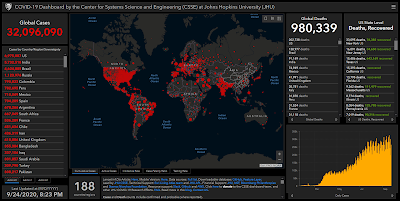 The number of coronavirus infections passed the 32 million mark on Wednesday, according to a tally by Johns Hopkins University, as countries including Britain and France reported record case numbers.

Britain saw the highest number of coronavirus cases in a single day at 6,632. Public Health England Medical Director Yvonne Doyle said the figure was a “stark warning’’ as infections rose across all age groups. She said citizens must follow the new restrictions announced by the government this week to control the spread of the virus.

Britain has the highest death toll in Europe, with nearly 42,000 confirmed dead. The rise in cases announced on Thursday reflects both the spread of the virus and increased testing, which has more than doubled since the peak of the first wave in April and May.

Iran opens a new naval base near the Strait of Hormuz amid tensions with US forces.

Yemen rebels mark 2,000 days of ‘resistance’ with stacks of cash.

China says US has ‘created enough troubles for the world’ as UN spat continues.

Attempt to overrun troops will be met with fire: India to China

Japan is resuming flights to China, and reopening its borders – but not to tourists.

Duterte gets tough on China, leaning back to old ally America.

France sees record in new coronavirus infections, with more than 16,000 cases in 24 hours.

Florida AG calls for probe into Bloomberg funds for ex-convicts.

Bolivia descends into chaos ahead of elections.

Venezuela’s Maduro calls on UN to rally against US sanctions.

Virus delays Rio’s Carnival for first time in a century.

U.S. prepares to take Sudan off list of states that support terrorism.

Who is a terrorist, actually?