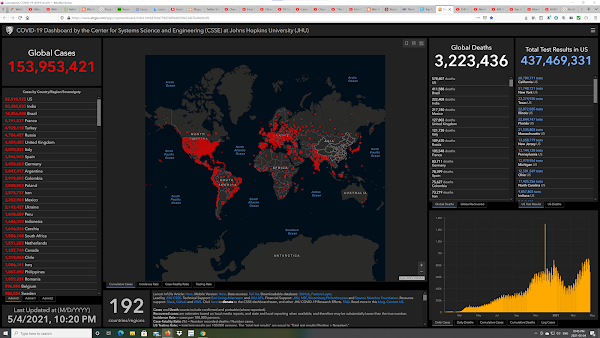 VOA: WHO: India, Brazil Account for Half of New Global COVID-19 Cases

The World Health Organization said Monday that India and Brazil accounted for more than half of the new COVID-19 infections in the world last week, as the United Nations agency and other groups rush aid to the regions.

Brazil saw 414,123 new cases. During a briefing at the agency’s headquarters in Geneva, WHO Director-General Tedros Adhanom Ghebreyesus said the WHO and its foundation are providing equipment and supplies including oxygen concentrators and mobile field hospitals to India.

As South Korea faces a surge in coronavirus infections, its vaccine rollout is spiralling.

Key Darfur accused wants to be tried at ICC.

For young people in Chad, ‘change’ after Deby’s death means more of same.

Ever Given cargo ship that blocked the Suez Canal to remain in Egypt by court order.

Biden sets goal of at least one shot to 70 percent of adults by July 4.

Pressure increases for US to send vaccines to Latin America.

Brazil backs away from the virus brink as deaths top 400,000.

Wine that went to space for sale with $1 million price tag.