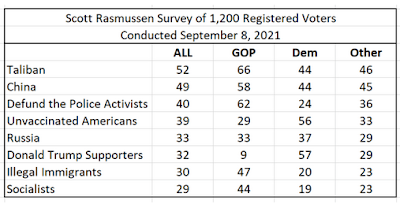 ScottRasmussen.com: Democrats See Trump Supporters and the Unvaccinated As Biggest Threat to Nation

Fifty-seven percent (57%) of Democratic voters believe supporters of Donald Trump are a serious threat to the nation.

A Scott Rasmussen national survey found that 56% of those in President Biden’s party also consider the unvaccinated a serious threat.

These results help explain the tone and actions taken recently by President Biden.

Republicans and Independents have a much different view of the threats facing the nation. For Republicans, the top concerns are the Taliban (66%), Defund the Police Activists (62%), and China (58%).

The top three concerns for Independents are the same as the GOP (though in a different order). The Taliban is the biggest concern for independent voters (46%) followed by China (45%) and Defund the Police Activists (36%).

WNU Editor: This poll explains why President Biden is pushing his Covid-19 mandates while ignoring Afghanistan. He is focused on what his base wants.